New York Times bestseller, 21 Pounds in 21 Days: The Martha’s Vineyard Diet Detox. Our youngest detoxer has successfully completed and her story is featured in Sunday’s New York Daily News. She shares her story about obesity in teenagers and how to lose weight the healthy way.. Our oldest is 80 years old and she would like to share her story with the seniors…. 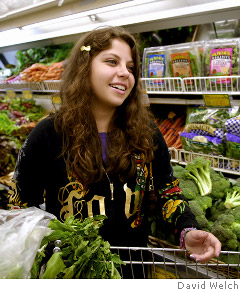 Ally Shapiro, 14, isn’t the kind of teenager you expect to find in a detox center.
She’s not partying like Lindsay Lohan or pill-popping and hitting the freeway like Nicole Richie. But, in August, facing another year of cafeteria food at her upper East Side high school, Shapiro decided it was time for gastrointestinal rehab.
“A lot of my friends thought I was crazy,” says Shapiro. “When I said ‘detox,’ they thought I meant drugs and alcohol and I had to make them understand that I was detoxing food.”

The program of choice was naturopathic healer Roni DeLuz’s all-liquid all-vegetable diet, popularized in her bestseller book “21 Pounds in 21 Days: The Martha’s Vineyard Diet Detox,” co-authored with James Hester.
The plan not only flushes toxins from the body, it sheds pounds – and fast.

“This wasn’t about weight,” says Jill Zarin, Shapiro’s mom. “That was just a by-product. It’s about eating better. If you talk to people who do yoga and have a healthy life, they detox once a year. Allison wanted to erase the blackboard, to detox her body and start over.”

Though she’s already a trim teen, Shapiro admits the start of school comes with scrutiny. Plus, she’s spending sophomore year in front of TV cameras. Zarin is one of the subjects of a reality TV show coming to Bravo titled “Manhattan Moms.”
In late August, Shapiro jetted to Vineyard Haven on Martha’s Vineyard, where for one week all she would eat – or rather, sip – were half a dozen high-nutrient low-cal vegetable drinks per day, one every two hours.

“Breakfast” consisted of an antioxidant berry drink and tea, followed by more tea midmorning with one of many “green drinks,” concentrated helpings of leafy vegetables plus Spirulina and blue-green algae, packaged and sold in health food stores.

Shapiro quickly discovered that when it came to food, the bare minimum wasn’t so bad – at least for seven days.
“The first day, I was hungry,” Shapiro says. “The second day, I had some cravings – not candy, but sweet things like strawberries and apples, something for sugar. On day three, I woke up and I didn’t really care.”

Though the detox can be performed at home, Shapiro’s time on the Vineyard included spa treatments such as naps in a detoxing sweat bed called the Alpha Spa. She also cooled her heels in a foot bath rigged with an electrical current that is supposed to draw toxins out through the feet.

“The first day I did it,” says Shapiro, “the water was completely black by the end.”

By day three, 20 minutes in the foot bath generated a copper-colored sludge – the color of the flushed buildup from her joints related to arthritis, DeLuz explained.

As a detoxer’s cells get the nutrients they need, but nothing extra, they dump toxins – such as cholesterol, hard minerals, insecticides and food additives – into the blood stream to be flushed away. 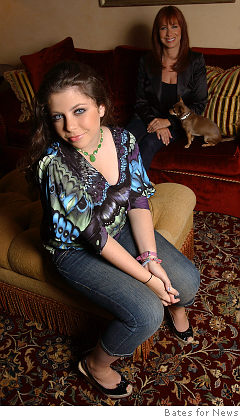 The dump causes what’s known as a “healing crisis,” which in Shapiro’s case meant a night of flu-like symptoms that meant the diet was doing its work.

“She called me and said, ‘You read the book! Why didn’t you tell me this was going to happen?'” says Zarin. “But then she started to feel better.”

By the end of her seven days, Shapiro had dropped 11 pounds and she had changed her outlook on mealtime.

“Last year, the lunch food was horrible,” she says, “and you ended up waiting until 4 o’clock to eat a whole sandwich, Coke, chips and then a big dinner. … I’m starting to feel better. At home, eating all that junk, I just wanted it all out.”

She plans to stick to the berry drinks and vegetable soup dinners, but she’ll be eating lunch with her friends – and maybe even convince them to go in for detox themselves.

“I hope when I go home,” says Shapiro, “they’ll see the results and trust me.”